In a previous blog post, we gave an overview about how neural networks (NN) can be used to predict solutions of the optimal power flow (OPF) problems. We showed that there are two major classes of widely used approaches: end-to-end and hybrid techniques. In the case of end-to-end (or direct) methods, a NN is applied as a regressor and either the full set or a subset of the optimization variables is predicted based on the grid parameters (typically active and reactive power loads). Hybrid (or indirect) approaches include two steps: in the first step, some inputs for the OPF are inferred by a NN; in the second step, an OPF is performed with the predicted inputs, which can reduce the computational time by either enhancing convergence to the solution or formulating an equivalent but smaller problem. Under certain conditions, hybrid techniques provide feasible (and sometimes even optimal) values of the optimization variables of the OPF. Therefore, hybrid approaches constitute an important research direction in the field. However, feasibility and optimality have their price: because of the requirement of solving an actual OPF, hybrid methods can be computationally expensive, especially when compared to end-to-end techniques. In this blog post, we discuss an approach to minimize the total computational time of hybrid methods by applying a meta-objective function that directly measures this computational cost.

Figure 1. OPF as an operator.

Figure 2. Flowchart of the warm-start method (yellow panel) in combination with an NN regressor (purple panel, default arguments of OPF operator are omitted for clarity) trained by minimizing a conventional loss function.

In the previous sections, we discussed the concept of hybrid methods that apply a NN either as a regressor or a classifier to predict starting values of the optimization variables and initial set of binding constraints, respectively, for the subsequent OPF calculations. During the optimization of the NN parameters some regression- or classification-based loss function of the training data is minimized. However, below we will show that these conventional loss functions do not necessarily minimize the most time consuming part of the hybrid techniques, i.e. the computationally expensive OPF step(s). Therefore, we suggest a meta-objective function that directly addresses this computational cost.

Conventional supervised regression techniques typically use loss functions based on a distance between the training ground-truth and predicted output value, such as mean squared error or mean absolute error. In general, each dimension of the target variable is treated equally in these loss function. However, the shape of the Lagrangian landscape of the OPF problem as a function of the optimization variables is far from isotropic [Mones18], implying that optimization under such an objective does not necessarily minimize the warm-started OPF solution time. Also, trying to derive initial values for optimization variables using empirical risk minimization techniques does not guarantee feasibility, regardless of the accuracy of the prediction to the ground truth. Interior-point methods start by first moving the system into a feasible region, thereby potentially altering the initial position significantly. Consequently, warm-starting from an infeasible point can be inefficient. Instead, one can use a meta-loss function that directly measures the computational cost of solving the (warm-started) OPF problem [Jamei19] [Robson20]. One measure of the computational cost can be defined by the number of iterations $(N(\hat{y}^{0}_{t}))$ required to reach the optimal solution. Since the warm-started OPF has exactly the same formulation as the original OPF problem, the comparative number of iterations represents the improvement in computational cost. Alternatively, the total CPU time of the warm-started OPF $(T(\hat{y}^{0}_{t}))$ can also be measured, although, unlike the number of iterations, it is not a noise-free measure. Nevertheless, Figure 4 presents the flowchart of the idea for using a NN with parameters determined by minimizing the computational time-based meta-loss function (meta-optimization) on the training set. As this meta-loss is a non-differentiable function with respect to the NN weights, back-propagation cannot be used. As an alternative, one can employ gradient-free optimization techniques. 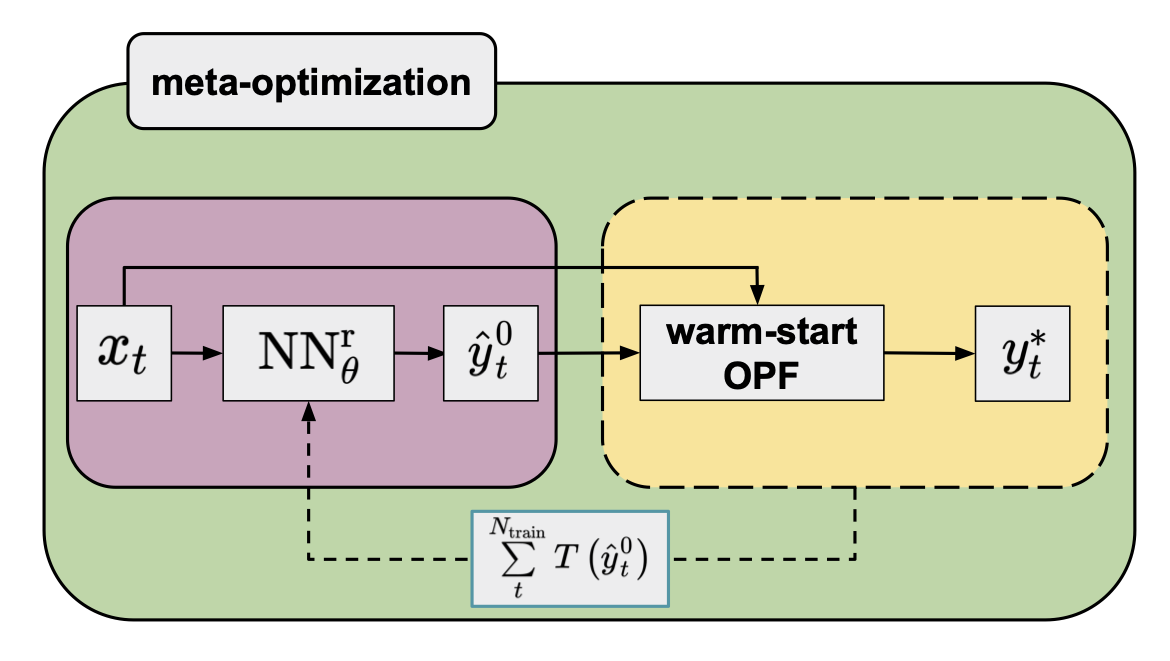 Figure 4. Flowchart of the warm-start method (yellow panel) in combination with an NN regressor (purple panel, default arguments of OPF operator are omitted for clarity) trained by minimizing a meta-loss function that is a sum of the computational time of warm-started OPFs of the training data.

In the case of the classification-based hybrid methods, the goal is to find NN weights that minimize the total computational time of the iterative feasibility test. However, minimizing a cross-entropy loss function to obtain such weights is not straightforward. First, the number of cycles in the iterative procedure is much more sensitive to false negative than to false positive predictions of the binding status. Second, different constraints can be more or less important depending on the actual congestion regime and binding status (Figure 5). These suggest the use of a more sophisticated objective function, for instance a weighted cross-entropy with appropriate weights for the corresponding terms. The weights as hyperparameters can then be optimized to achieve an objective that can adapt to the above requirements. However, an alternative objective can be defined as the total computational time of the iterative feasibility test procedure [Robson20].

Figure 5. Profile of the meta-loss (total computational time) and number of iterations within the iterative feasibility test as functions of the number of constraints for two grids, and a comparison of DC vs. AC formulations. Perfect classifiers with the active set (AS) are indicated by vertical dashed lines, false positive (FP) region is to the right and false negative (FN) region is to the left [Robson20]}.

The meta-loss objective, therefore, includes the solution time of a sequence of reduced OPF problems. Similarly to the meta-loss defined for the regression approach, it measures the computational cost of obtaining a solution of the full problem and, unlike weighted cross-entropy, it does not require additional hyperparameters to be optimized. As the meta-loss is a non-differentiable function of the classifier weights, we must optimize it using a gradient-free method. 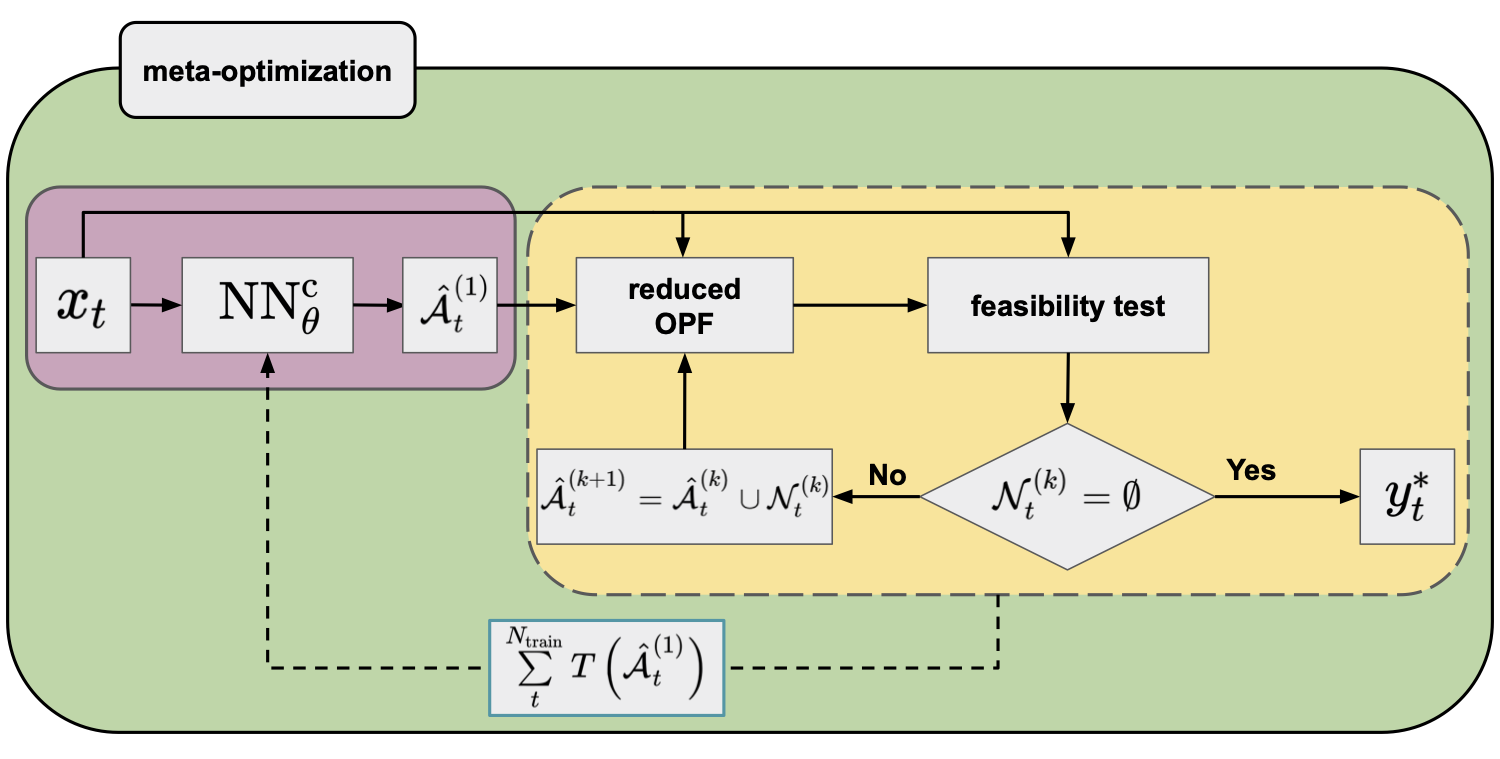 Neither the number of iterations nor the computational time of the subsequent OPF is a differentiable quantity with respect to the applied NNs. Therefore, to obtain optimal NN weights by minimizing the meta-loss, a gradient-free method (i.e. only the value of the loss function is used) is required. The particle swarm optimization was found to be a particularly promising [Robson20] gradient-free approach for this. Particle swarm optimization (PSO) is a gradient-free meta-heuristic algorithm inspired by the concept of swarm intelligence that can be found in nature among certain animal groups. The method applies a set of particles ($N_{\mathrm{p}}$) and the particle dynamics at each optimization step is influenced by both the individual (best position found by the particle) and collective (best position found among all particles) knowledge. More specifically, for a $D$ dimensional problem, each particle $p$ is associated with a velocity $v^{(p)} \in \mathbb{R}^{D}$ and position $x^{(p)} \in \mathbb{R}^{D}$ vectors that are randomly initialized at the beginning of the optimization within the corresponding ranges of interest. During the course of the optimization, the velocities and positions are updated and in the $n$th iteration, the new vectors are obtained as [Zhan09]: \begin{equation} \begin{aligned} v_{n+1}^{(p)} & = \underbrace{\omega_{n} v_{n}^{(p)}}_{\mathrm{inertia}} + \underbrace{c_{1} r_{n} \odot (l_{n}^{(p)} - x_{n}^{(p)})}_{\mathrm{local\ information}} + \underbrace{c_{2} q_{n} \odot (g_{n} - x_{n}^{(p)})}_{\mathrm{global\ information}} \\ x_{n+1}^{(p)} & = x_{n}^{(p)} + v_{n+1}^{(p)}, \end{aligned} \label{eq:pso} \end{equation} where $\omega_{n}$ is the inertia weight, $c_{1}$ and $c_{2}$ are the acceleration coefficients, $r_{n}$ and $q_{n}$ are random vectors whose each component is drawn from a uniform distribution within the $[0, 1]$ interval, $l_{n}^{(p)}$ is the best local position found by particle $p$ and $g_{n}$ is the best global position found by all particles together so far, and $\odot$ denotes the Hadamard (pointwise) product. As it seems from eq.~\ref{eq:pso}, PSO is a fairly simple approach: the particles' velocity is governed by three terms: inertia, local and global knowledge. The methods has been derived originally for global optimization and it can be easily parallelized among the particles.

We demonstrate the increased performance of the meta-loss objective compared to conventional loss functions for the classification-based hybrid approach. Three synthetic grids using both DC and AC formulations were investigated using 10k and 1k samples, respectively. The samples were split randomly into training, validation, and test sets containing 70\%, 20\%, and 10\% of the samples, respectively. A fully connected NN was trained using a conventional and a weighted cross-entropy objective function in combination with a standard gradient-based optimizer (ADAM). As discussed earlier, the meta-loss is much more sensitive to false negative predictions (Figure 5). To reflect this in the weighted cross-entropy expression, we applied weights of 0.25 and 0.75 for the false positive and false negative penalty terms. Then, starting from these optimized NNs, we performed further optimizations, using the meta-loss objective in combination with a PSO optimizer. Table 1 includes the average computational gains (compared to the full problem) of the different approaches using 10 independent experiments for each. For all cases, the weighted cross-entropy objective outperforms the conventional cross-entropy, indicating the importance of the false negative penalty term. However, optimizing the NNs further by the meta-loss objective significantly improves the computational gain for both cases. For AC-OPF, it brings the gain into the positive regime. For the details on how to use a meta-loss function, as well as for further numerical results, we refer to [Robson20].

Table 1. Average gain with two side $95$\% confidence intervals of classification-based hybrid models in combination with meta-optimization using conventional and weighted binary cross-entropy for pre-training the NN.

NN-based hybrid approaches can guarantee optimal solutions and therefore they comprise a particularly interesting research direction among machine learning assisted OPF models. In this blog post, we argued that the computational cost of the subsequent (warm-start or set of reduced) OPF can be straightforwardly reduced by applying a meta-loss objective. Unlike conventional loss functions that measure some error between the ground truth and the predicted quantities, the meta-loss objective directly addresses the computational time. Since the meta-loss is not a differentiable function of the NN weights, a gradient-free optimization technique, like the particle swarm optimization approach, can be used. Although significant improvements of the computational cost of OPF can be achieved by applying a meta-loss objective compared to conventional loss functions, in practice these gains are still far from the desirable (i.e. the total computational cost should be a fraction of that of the original OPF problem) [Robson20]. In a subsequent blog post, we will discuss how neural networks can be utilized in a more efficient way to obtain optimal OPF solutions.

[Wachter06]: A. Wächter and L. Biegler, "On the implementation of an interior-point filter line-search algorithm for large-scale nonlinear programming", Math. Program. 106, pp. 25, (2006).